Is Music Instrumental to Learning?

"It’s easy to play any musical instrument: all you have to do is touch the right key at the right time and the instrument will play itself."

That’s very easy to say if you happen to be JS Bach, but what about the rest of us mere mortals?

Every so often we hear in the press about a three year old prodigy who can play exceptionally demanding and intricate passages of Mozart, or the coma patient who wakes up suddenly able to play the piano (it always seems to be the piano!). Apart from these sporadic exceptions, the rest of us have to learn the hard way through trial and error, repetition, technique and a healthy dose of natural ability.

So what’s the point in learning an instrument, or paying a small fortune for your child to learn an instrument, if you or they are never going to become a concert violinist, study Music at University, take it at ‘A’ Level or GCSE, or even go as far as Gd II? If your budding Wynton Marsalis is learning at school, the chances are that he or she is missing an academic lesson each week in order to have these lessons. Both financially and academically, it can seem like a high price to pay for something that is unlikely to lead to a permanent career w 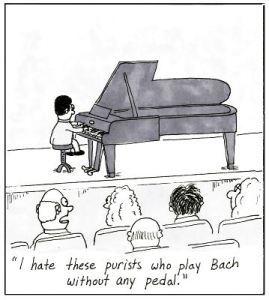 Many of us have heard about the Mozart Effect, a (fairly unreliable) study that began life as a scrutiny of short-term memory and the effect Mozart’s music had on it. I’ve no doubt that listening to many types of music can do good things – the brain’s nuts and bolts do some interesting acrobatics when besieged with both familiar and unfamiliar music (an interesting article about this from the BBC can be found here). However, once the marketing teams got wind of the Mozart Effect it was exploited as some sort of magic formula for producing a genius. In any case, whether you believe in the Mozart Effect or not, the study showed that the effects lasted for no longer than 15 minutes. Useful perhaps when revising for an exam assuming, of course, that you are one of those people who studies best when listening to music…

I think we can say, without doubt, that listening to music is good for the brain. Much more research needs to be done before we can draw any more specific conclusions but, in the meantime, we can listen to any music we like and know that it is doing something constructive, quite literally, to our brain.

Which brings me back to learning an instrument: musicians’ brains have a different, superior structure and function to the brains of mere muggles. The areas of the brain that control hearing, memory and motor skills become larger in those who learn or regularly play an instrument, and this in turn improves general alertness and decreases clumsiness. Even adults who begin learning an instrument show evidence of similar changes, known as ‘brain plasticity’, which I admit sounds painful. You can read more about it here, which will take you to the limit of my knowledge of brains.

At Prebendal, we are often asked by parents which instrument would suit their child – it’s very tempting to say bassoon, oboe, harp, or any other instrument that schools tend to lack in their ensembles. I usually advise the three following points:

Once these boxes have been ticked, we explore other issues. One great motivating factor for children is playing in an ensemble – we currently have many pianists in the school and they can’t all play in Concert Band. If they only want to learn so that they can play in a group then just about any other instrument is preferable, either instead of the piano or alongside it. Ensemble work gives children valuable skills in listening, cooperation, mathematics, manual dexterity, organisation and motivation, and experience the valuable life lessons of frustration, elation and success. They learn that it is worth investing time in order to get something right, and that sometimes this needs to involve exceptional hard work and patience. This, in turn, is rewarded when they apply to University and their Gd VI+ instrumental and theory exams count towards their entry score – UK Universities certainly value these abilities highly. Well worth missing the occasional Maths lesson, I’d say!

A small number of children will achieve the lofty heights of Bach’s fluency; the remainder will be all the better for trying.

Written by Louise Salmond Smith
Back to News ListPreviousNext